Because it’s almost Valentine’s Day it seems like a swerve from my main topic is justified. I’m unlikely to be the only adult with scabs from childhood valentine’s day parties. Truly I don’t remember most of those stuffed shoe boxes of cards, and I assume most of the other children in my Catholic school classes followed the rules of etiquette and gave a meaningless remembrance to everyone. In sixth grade, though, I attended a public school, and like many of the other girls in my class, I was in love with Doug. Doug was sweet, and unassuming, and quiet, and cute. And that Valentine’s Day there were two of those flimsy cards from him in my box. On the bus ride home I confided this to Beth, and ventured that maybe that meant he liked me.

“Or he forgot he’d already given you one,” she said.

I laughed. It was true that he wasn’t that likely to be interested in mousey me, and it wasn’t hard to imagine his mother making out a card to the forgotten “new” girl. It dashed my hopes, but I continued with my crush on Doug in 7th, 8th, and 9th grade. By sophomore year it was waning, although I’m sure if he’d ever paid the least bit of attention to me, I would have perked up. Alas, as far as I knew he continued in his quiet ways, not being openly involved with anyone that I remembered.

I found his picture on the Internet at some point prior to that 35th reunion. He looked like that sweet cute boy, although heavier and balder. He was married and a race car driver. A race car driver. I had to laugh. I could think of few things that would interest me less than car racing. It made me doubt what it was I saw in him–until that reunion six years ago.

We’d contacted our teacher, Mr. M, and he attended our Sunday picnic where six of us in attendance took a picture with him. Although Doug had been at the dinner the night before with his pretty wife, he wasn’t at the picnic. He’d had a recent bout with cancer and was now thin and frail, and even though I wanted to say something to him, I never found myself in the same vicinity. 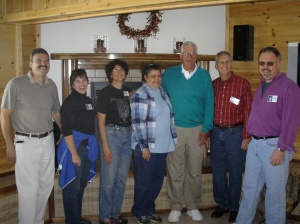 Mr. M recounted a story about Doug and all the books he’d read that sixth grade, and how Doug made the observation that he was smart, and that made me realize that his interest in learning and reading back in 6th grade must have been part of why I’d been interested in him.